Human Factors and the 80/20 rule of understanding

With technology comes automation, and the new decade foresees more and more processes to become automated or robotised. From taking over mundane tasks such as

moving objects to supporting us in our daily chores, automated systems will soon be able to complete end-to-end operations. Are robots taking over? 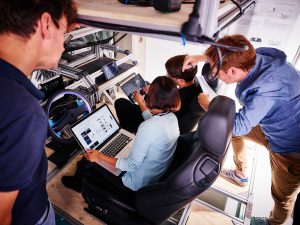 Are robots taking over?

Not fully, yet. As technology matures the role of the human operator shifts to that of a supervisor. But that doesn’t mean this frees up time to engage in other activities. Current systems are not fully autonomous, and users will find themselves constantly monitoring the system at work, which requires the same amount of alertness and mental capacity. At times the supervisor might have to revert back to their former role as operator, when the system requires manual guidance. Especially this shift in role poses new performance challenges. Many times the human is not alert which slows down reaction time to unacceptable lengths, or the seamlessness of the human – system interaction is deficient in other ways. Ultimately rendering the human the weakest link in the system.

Focus on the human

At VanBerlo we believe design should be human-centered, especially in cases where mishaps in the use scenario involve human factors. Designing for a seamless interaction entails a lot of research. But rather than analysing everything up front, we prefer a fail fast learn fast approach. By creating prototypes and conducting user tests at an early stage, we are sure to set the right frames from which to move forward.

The big opportunity is that the industry of automated mobility is an emerging industry. This means that existing boundaries in terms of legislation do not have to restrict our creative freedom. Rules will have to be rewritten. In order to bring real disruptive innovation to market, this freedom is key. We love to be at the forefront of innovation, playing an important role in the development of our future. Even more we love to get a carte blanche to imagine truly new ideas. There is nothing that will hold us back.

Bas Bruining will talk about our contribution to this rapidly changing field, and the projects we are working on, in more detail at the seminar that VanBerloAgency and AutomotiveNL will host  January 30th.